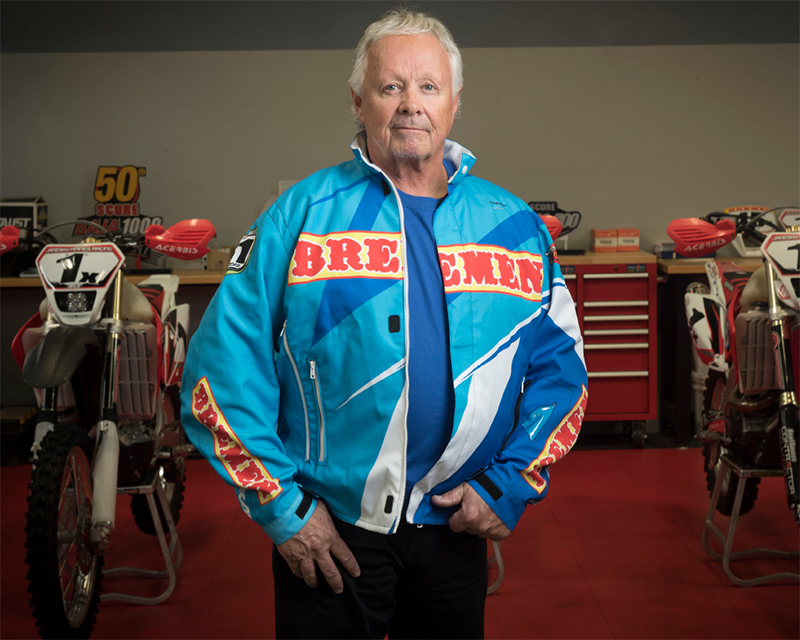 Lake Elsinore, CA- AMA Hall of Fame Inductee Chris Haines was featured in the July 2019 issue of SCORE Journal Magazine, the official publication of SCORE International Off-Road Racing. The digital publication focused on Haines’ history that started in the motocross industry and ended up in desert off-road racing, culminating with Haines’ Motorcycle Adventure Company that specializes in Baja tours and introducing people into the sport of Baja motorcycle racing. “I’ve competed in Baja racing for more than 33-years and have been fortunate enough to continue to organize, mentor, and be a part of several winning efforts that includes the SCORE 2017 Pro Moto Unlimited championship team of Francisco Arredondo, Pro Moto Ironman racer Larry Janesky, and many others,” says Haines.

From working at a lawnmower repair shop in New Jersey at age 15 to building Speedway motocross bikes for Suzuki and Honda, Haines’ career included working for AMA Motorcycle Hall-of-Fame Inductees such as Bruce Penhall and Tony DiStefano. “I got injured racing Speedway after I came back from the military, so I began building bikes for a while…lots of bikes,” said Haines.

After success with Suzuki, Haines was asked to join American Honda, where he spent 10 years at Honda Racing Corporation working with racers on the motocross side. “It was then that AMA Motorcycle Hall-of-Fame and Baja off-road motorcycle racing pioneer Bruce Ogilvie, came around and asked us for help with parts for his Baja racing team,” said Haines.

Haines had liked the idea of racing in Baja and would ultimately begin riding again and teamed up with friend and AMA Hall-of-Fame Inductee Jack Johnson. “We had been riding in Baja for fun but thought it would be great to race it.” Over the
years, Haines earned three SCORE Baja 500 class wins and 15 SCORE Baja 1000 class wins, as well as a SCORE Class 40 and Class 50 Championships. Haines and Johnson teamed up with AMA Motorcycle Hall-of-Fame Legend Malcolm Smith, to win the Vet Class at the SCORE Baja 2000, and again in 2014 at the SCORE Baja 1000 to honor Smith in his last Baja race, winning the Pro Moto 50 class.

Haines eventually began a tour company to share with others the beauty and thrill of riding in Baja. “The tours would eventually compel someone to compete in SCORE and eventually, these same people wanted me to build their bikes to race,”
said Haines. Some of the latest teams Haines has assisted with are SCORE Pro Moto Ironman racer Larry Janesky and 2017 SCORE Pro Moto Unlimited Champion Francisco Arredondo. “Both these guys came to us, and we made a turn-key racing team for them,” said Haines. “That’s now a part of my business too. We take a lot of pride in working with individuals who are not familiar with SCORE events and educate them. We love to see them grow as racing individuals. Arredondo, for example, came to us 10-years ago, then became the 2017 overall Pro Moto Champion. We’re very proud of that.”

Along with a knack at building racing motorcycles, Haines also applied his knowledge of the sport and the machines and became very good at turning out SCORE motorcycle racers. “I like the logistics part of it and dealing with people and personalities,” says Haines. “Identifying their potential and elevating their game is fantastic. I like the camaraderie of it and SCORE events. It’s a challenge, every race is different. Figuring it out and having it all come together is what’s fun for me now.”

With decades of stories of his days prepping bikes, teams, and racing in SCORE, Haines has two very memorable moments. “One is racing and winning our class with Malcolm and Johnson at the SCORE Baja 2000,” said Haines. “The other is when I first met Roger Norman who would eventually come to own SCORE International. We met around ‘96 when my wife became good friends with Roger’s wife Elise Norman. I helped Roger with a previous race in Nevada, and I knew a guy that had a pretty good Class 2 buggy that we could race. Roger and I teamed up and we both drove half of the race. We finished fourth in class, and that’s where Roger got the bug.”

With a winning history in professional motocross and more than 40-years of riding and racing in Baja, Chris Haines is also known as one of the best racing bike preppers in the business. He more than anyone knows that you can’t just take a stock motorcycle and ride the Baja desert. He, along with his head mechanic Jimmy Holly, demonstrated some basic set-up tips any motorcyclist can use in Baja racing. These simple modifications also apply to anyone going on an off-road excursion through the desert and prevent simple solutions to common small problems that can turn into big ones during a ride.

SEATS
It sounds simple enough, but preparing your motorcycle for Baja can start with some of the simple things like the seat. According to Haines, some riders prefer the stock seats, such as this factory Honda seat, that offers a durable textured top and rubber sides, allowing the rider to stay on the bike better. Others, like SCORE Pro Moto Ironman competitor Larry Janesky, prefer an aftermarket seat that provides more cushion and is covered in a softer suede.

FUEL TANK
One of the first upgrades that Chris Haines makes to his Baja racing and excursion motorcycles is to upgrade the factory 2.5-gallon fuel tank to an aftermarket 3.5-gallon unit. The extra fuel allows racers to go farther between pitstops. In Baja excursions the extra fuel allows riders to make it to the next gas station.

QUICK-FILL GAS CAP
In Baja racing, time is everything, so even changing out the factory fuel tank cap with an aftermarket racing quick-fill cap is an easy upgrade. When used with a quick fill fuel jug, it makes refilling quick and safe.

EXHAUST MODIFICATIONS
Haines’ head motorcycle mechanic Jimmy Holly preps the exhaust system, as it typically gets bent or damaged in Baja racing. Adding thread sealer to the bolts and lubricating the joints with a high-temperature antiseize makes it easier to disassemble out in the field when necessary.

CHAIN ADJUSTMENT
Holly points out the proper position that the motorcycle’s rear suspension should be, in order to make proper chain adjustments. According to Chris Haines, off-road terrain makes the rear suspension move up and down along its full range of motion. Making sure that the chain is properly adjusted eliminates it from being too tight, which can break and/or cause the
chain to hit the engine and damage additional engine components.

HANDLEBAR & THROTTLE REPAIR
It’s common for a rider to go down in Baja and if the bike falls on the right side, it may damage the throttle. Haines and Holly offer some suggestions when adding a new handle and to prevent sand and moisture from damaging the throttle in the future.

FORK SLEEVES
While factory forks have seals to prevent moisture and dirt from entering into the shock, Haines’ experience says that silt from dry lake beds and moisture still seeps in. For an added layer of protection, they use aftermarket neoprene sleeves that do the job well. For any additional information on motorcycle prep or to experience a guided Baja Excursion, contact Chris Haines Baja Adventure Tours, (866) 262-8635.