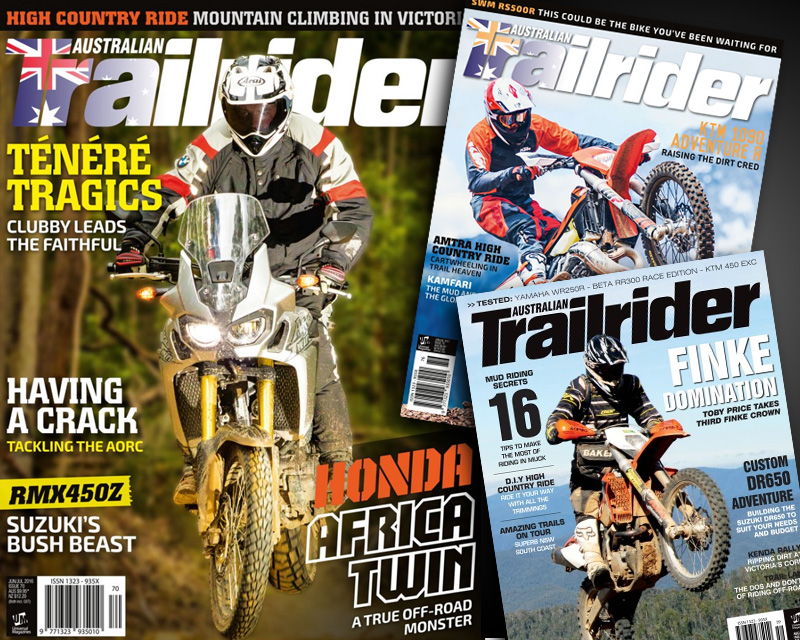 Taking Baja Off Road Tour’s Trip Around the Peninsula

Sitting in an airplane during a snow storm, getting de-iced before take off is not my idea of how to start a motorcycle trip. But here we were-nine New Englanders, heading for San Diego! It is truly an oxymoron to go from snow and ice to 75 degrees and dirt bikes all in the same day. Such is the nature of modern transportation.

We were traveling to ride Chris Haines’ Baja Off Tours trip to the Baja Peninsula of Mexico. Getting off the plane was indeed a culture shock. Warm temperatures, palm trees, and a Mediterranean climate. One can see why they say San Diego has the most ideal climate in the United States.

Here we hook up with another group of twelve from Northern California (the groups ride separately), and it was immediately apparent that Chris Haines had his act together. There were two new nine-passenger Ford vans and a new four-wheel drive Ford crew cab pickup for luggage and passengers.

The drive down the Pacific coast from San Diego to Ensenada, a distance of eighty miles, was very scenic. Small Mexican seaside towns could be seen across the open, hilly terrain, with hotels offering $35 ocean view rooms. It is also the land of fish and shrimp tacos-delicious because you can’t get them any fresher.

Pulling into the hotel in Ensenada, we could see the motorcycles we would be riding. It looked like a Kawasaki display at Daytona during Bike Week: a large tractor trailer painted up in Kawasaki colors and 23 green bikes lined up in a large square. Quite impressive; as was the hotel with all modern convenience-just don’t drink the water! To dirt bikers, beer is the golden nectar of choice anyhow, so it did not matter. Chris took us out to dinner to a fine restaurant, and we could order anything on the menu. Steak and lobster combo was the consensus. We felt sorry for ourselves.

The Haines operation has 30 bikes. We could ride a choice of late-model Kawasaki’s, KLX50 or 650, or KDX200s, all fully prepped and set-up, including neat items like Pro-Taper bars and Pro-Circuit pipes. We could not only select our own bike, but could also switch around , which we did; each of us finally setting on a bike we liked.

The first part of the ride was from Ensenada out of the coastal fog, up into the mountains on a tar road for 26 miles. The Morning chill broke out into a 75-degree day and blue sky (as it did every day)-perfect for riding in February!

My impression of off-road riding in Baja has always been people riding in a wide line across desert terrain, looking out for cactus. In reality, it is a series of “car wide” roads through varying terrain. The first section of our trip was into high chaparral country, with lots of pine trees. The dirt road twisted and turned, up and down, and we were able to get a good riding rhythm going.

One of our guys, Ben “Zeima” Bauer, missed a turn over a rise and then tried to move a big manzanita bush with his body. He succeeded, and then tried to move a six-inch pine tree…unsuccessfully. He bounced from the tree, it clean his clock, and he was out for the count. After a few minutes he came around, and we sorted him and his bike out and continued on our way. He had hurt his shoulder, so he decided to sit the afternoon out when we stopped for lunch.

Lunch was in the middle of a dried out lakebed, and Baja Tours set up a sandwich gourmet table under a portable tent enclosure. They filled us and our bikes-and even cleaned our goggles! Very professional.

After lunch was a series of trails running across valley floors and back up into the mountains, before coming to the most technical riding of the trip. “Technical riding” usually means very challenging, and this was. Beginners will have trouble, but Baja Tours will vary the ride to suite the riders. There were several steep, long twisting uphills with gnarly baseball-size rocks, spread out over eroded, rutted terrain. Our group experienced a few “flying Ws” and jackhammer rides to the ground, but nothing serious and all in fun.

We were riding what is know as the back side of Mike’s Sky Ranch, and for New Englanders it is just like normal power lines in New Hampshire, except in scrub brush terrain. We had a ball going up and down like roller coasters, with much better views because of the lack of trees. The first day’s mileage was 140.

Mike’s Sky Ranch, our stop for the night, is famous among motorcyclists. It sits in a valley surrounded by high, brush-covered mountains, in the middle of Baja, and it’s the last ranch on a twenty-mile dead end dirt road. It is always “twenty miles to anyplace” in Baja. You are truly in the middle of nowhere, with nobody around. It has been used by the conquering hordes of motorcyclist that travel down here for as long as anyone can remember.

Mike’s bring new meaning to the term “rustic.” The electricity is shut off at 10 p.m. because that’s when they shut off the generator. The beds are nice, the rooms are heated with a small heater when necessary, the slower is great, and they have one satellite TV in the bar. The bar is the center point of existence here, and where, after a great ride, male bonding takes place with all the war stories, lies, laughs, and generally embarrassing behavior thrown in. There has to be every motorcycle sticker ever made stuck to the walls, and it justifies all this crazy behavior. Just don’t expect decaffeinated cappuccino.

If you like riding sand and whoopdedos, this was the day for you. Our ride involved riding two long sections of desert valley floor, sandy roads between mountain ranges, with a mountain section of technical trail in between. The sections were 120 miles, total.

You actually learn how to ride this stuff by trial and error. Keep the front end light and you glide over it like a surfboard or water ski. The whoops were usually not so deep or close together, and the sand was not so soft that you couldn’t get a rhythm going. There are moments when you really enjoy the sensation of boogie-boarding through sand, as long as you loosen up your grip and let the bike find its own line. If you fight it, you get worn out. Of course, there were a few times when our riders overreacted or got their timing wrong. The biff of the day went to Trevor “Woody” Gionet, who did a flying Z (versus W) and looked like he was trying to mate with his KLX.

This ride led us to San Felipe, a resort town on the east coast of Baja, and Baja Tours does it right. The hotel was on the ocean. All rooms have an ocean view and all the amenities of U.S. hotels. Cases of beer coast $6, and a single beer was $1. Life is good. The night list consisted of a local bar, with a guy with a green painted face, white glove, and striped jacket and tie playing pool against all comers. He is a cross between the Riddler and Michael Jackson; we felt like we were in the bar from Star Wars. Kenny “Watch This” Held bet him for his striped jacket, and the proceeded to whip his green face, but the guy refused to give up his jacket, leaving sullen and bummed out. No more attention for him.

The longest day consisted of 240 miles of riding. Anyone can ride it because it is mainly dirt roads through the best of Baja terrain, back to Ensenada. The morning ride was essentially from east to west through spectacular mountain scenery. The twisted dirt road was similar to the highlands of Scotland. It was used in last year’s Baja 500-most of our tour riding was done on the Baja 500 or 1000 course-and seemed like a bunch of Pike’s Peaks hillclimbs put together. The racers must have an over dose of testosterone to ride the speeds they go over these mountain roads. Sixty miles an hour around blind curves with hundreds of feet of drop-off can make my palms sweat. They don’t shut off the course during the race, either-any wandering horse, bull or pickup can be around the corner. Kenny Held and I almost became hood ornaments on a dune buggy that came around a corner at about 50mph in a slide. We were both run off the road, luckily into a ditch.

Lunch was served at the west end of the road in a beautiful, lush valley, with hundreds of acres of vineyards. After lunch we continued and Kenny finally figured out he had a problem with his bike. From the start, he knew there was something different about his KDX200. It was not your mother’s Kawasaki. He never got tired on it, and never seemed to get into trouble. He loved the bike, and just thought he was having a good time. He asked me to try his bike. A KDX200 has never been my first choice as a mount, preferring the hit of a 250, but this one was different. The suspension was firm but plush-you could nail berms and whoops, or cross rock fields without it moving at all. It had no steering damper, yet it was rock steady, like on a rail. The stability was amazing, yet it turned easily. And, the motor was like a KDX on steroids. Normally a powerband has a curve in it. This one was like a straight line-straight up-with no dead spots. Power everywhere, all you could use, wherever you wanted it, yet completely manageable.

Haines told us the motor was stock, the suspension was stock, and the big, bulbous pipe was something someone had given him (I think if he told us the truth everyone would have wanted one). After questioning his staff we found out that this was a bike three Japanese team riders used in the Baja 500 to take a third place in class, and it was set up by the Kawasaki factory team-a works racing bike living as a rental bike, and given to a normal tour participant…although Kenny and the word “normal” are not usually used together. It was perhaps the best motorcycle I have ever ridden, and it gave me a rush no other bike can duplicate. Kenny liked it so much he’s negotiating to buy it…just don’t automatically expect to get a factory bike on your trip! Chris will set up a bike and support crew for any team interested in racing Baja, though.

The last section of the day was about 40 miles of dirt road right alongside the Pacific Ocean. Anywhere else, the road would be paved and have 7-11’s all along it. This road was like a long motocross track, going up and down hills with awesome mountain and ocean scenery. All our riders let loose on this final section, on the final day. It was a very satisfying finish to a fine trip.

In total we road 500 miles, just like the Baja 500, in three days. Baja is diverse, varying terrain, and not just desert, as I had thought. Its beauty lies in its stark, raw ecology. Harshness has it’s own beauty, and man takes second place. The country is under populated, and oversupplied with all forms of nature. Chris Haines has allowed the average spode to see and experience it. The cost of our three-day trip was worth every penny. Smiles and laughs guaranteed.